The familiar storming bass lines of ‘Amassakoul N’ Tenere’ ring out across the sand dunes as Tinariwen take to the stage in full Tuareg robes & shesh[1] headdress… The now legendary poet guitarists are greeted with rapturous excitement by the audience, as their desert-rebel beats echo through the star-filled Sahara night sky…. Despite Tinariwen’s significant worldwide success, there is nothing quite like hearing them playing on ‘home ground’, to an audience that knows the lyrics to all the songs, and feels the passion behind them in a way that European audiences probably never could…. 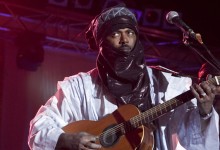 Tinariwen closed the first day of this years ‘Festival au Desert’ in Mali, following a whirlwind opening concert consisting of previews of many of the great Malian musicians who are to play throughout the weekend, such as Bassekou Kouyate; Tartit; Haira Arby and Habib Koite. Longer performances took place in the evening, including the Sept Etoiles de Dire; Groupe Folklorique Bellafarandi and the phenomenal Fantani Toure, sporting a wild red headscarf, and whose energy and presence blew the crowd away….

In response to the perceived ‘security concerns’ of certain foreign governments, it was decided to move the 10th edition of the Festival from its usual site near Essakane to just outside Timbuktu. This seemed a fitting venue however, given that Timbuktu is celebrating its own 1000 year anniversary this year, and the crowds are swelled by proud and excited locals who have walked out from the town each day to experience the festival.

Despite not being several hours drive into the desert, this is still very much the Sahara however; there is sand everywhere, as far as the eye can see, and it takes a while to get used to my feet sinking ankle deep into the pale soft dunes that curve up and down to the horizon, and which become patterned with tiny bird footprints in the early morning light….

When we arrive on Thursday afternoon the final touches are being put to the main stage, and there is an air of expectancy as groups of elegant looking Touaregs on their camels appear from over the top of every sand dune, mingling with tourists arriving in 4 x 4’s and Malians from every corner of the country.

Welcoming speeches at the opening ceremony are given by the Mayor of the City and the Minister of Culture, Hon. Mohamed el Moctar. Their heartfelt emphasis on the key themes of the Festival – peace, co-operation, security – are echoed time and again throughout the Festival, and serve as a reminder of the Festival’s roots, in the “Flamme de la Paix” (Flame of Peace) ceremony held at the end of the Touareg rebellion in 1996, where more than 3000 firearms were burned and transformed into a monument to peace.

After a small technical hitch the music begins with traditional Touareg bands from Mali and Niger. Impressive performances are delivered in particular by Terakaft; Group Folklorique Niafunke and Rhissa Ag Wanagli…. Despite having previously listened to a certain amount of Touareg music before my trip, nothing has quite prepared me for the visual impact of traditional Touareg dancing; a graceful sinewy undulating movement that seems to start from the neck and flows through the body down to the hips and feet, accompanied by exquisitely precise, delicately flowing hand gestures. 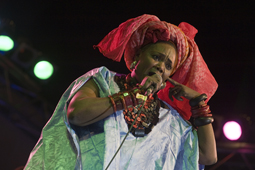 The Touareg musicians create a powerful visual presence on-stage, the men mostly in full traditional dress, often with only their eyes showing; dances involving vicious looking swords twirled around their heads are executed with equal style as when they are wielding electric guitars….. The women are the soul of grace and elegance; swathed in beautiful robes; henna decorations on hands and arms; elaborate jewellery and headdresses, and a strong, confident self-possessed presence both on stage and off….

Nowhere is this embodied more strongly as when Tartit take to the stage; led by 5 women, who mainly sit on stage playing cyclic rythms on tinde drums; their performance is accomplished and joyful. Their lead singer, Fadimata Walett Oumar, a superstar in her own right and role model for many young Malians appears on stage throughout the festival with several other bands, including Koudede from Niger, clearly enjoying the opportunities for musical collaboration that the festival provides. 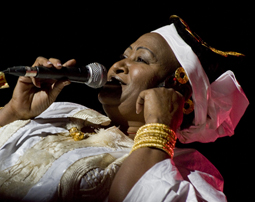 Bassekou Kouyate delivers yet another of his passionate, polished performances; this is now the third time I have seen him perform in as many different countries, yet he seems to get better every time, and his band even more slick and tight. The evening is rounded off with a tribute to Ali Farka Toure, led by Afel Boucum, and including performances by Vieux Farka Toure, Haira Arby and Babah Salah.

By Saturday I have become somewhat accustomed to being woken up by the sound of camels grunting right behind my tent; of stumbling out to be greeted by the sight of Touaregs parading around nonchalantly on their camels, their brightly coloured robes and swords glinting in the searing desert sunlight, and of the legendary Touareg hospitality involving numerous invitations to drink the obligatory ‘three cups’ of Touareg tea[2]…. 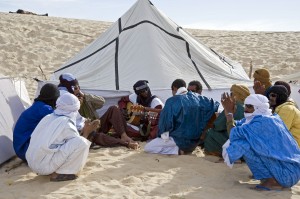 During the day on Saturday I come across members of the group Amanar entertaining a small crowd with an impromptu jam session outside a tent. The festival is not only an opportunity for Malians to see some of their favourite super-groups, but is also an important showcase for up and coming unsigned bands such as Amanar, who already seem to have a strong following. Their sound has echoes of Tinariwen, tinged with reggae; modern, but unmistakeably Touareg…

The non-African international artists at the festival are an eclectic mix, including Dick and Hnatr – an authentic Kanak group from New Caledonia; Dady Dasty – a rap group from Martinique; Skullroots from Norway, with an unusual take on the jews harp; the Leni Stern Band (USA), and Harper Simon (son of Paul). 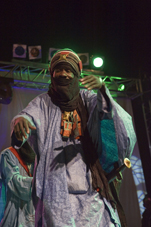 The idea of Hebrew cantorial vocals may sound like an unlikely choice for a festival in the Sahara, before a largely muslim audience, but New York band Sway Machinery deliver an extraordinary performance, and Jeremiah Lockwood’s haunting vocals, together with an impressive bass saxophone seem strangely at home amongst the desert blues. As if to emphasise this mellow blending of cultures, the band joins the great lady of Timbuktu Haira Arby on stage and they jam as if they’ve been playing together for years…. The band are due to record their next album in Bamako with Malian musicians, which promises to be a rare musical collaboration.

Other treats on Saturday night include a gymnastic Michael Jackson tribute band, rap group Double K Non, and from Niger; Mamar Kassey and the marvellous Koudede, with his own brand of superb desert blues. And this has to be the first festival I have attended where announcements from the stage include lost camels….(!).

The evening is rounded off by a blinding jam session led by Cheik Tidiane Seck and his band of highly accomplished musicians and singers. The band provide support for stunning performances by Habib Koite, Kasse Mady Diabate, Mangala Camara, and the always excellent Amadou and Miriam, who had been eagerly awaited by the crowd, and finally took to the stage around 3.00am. 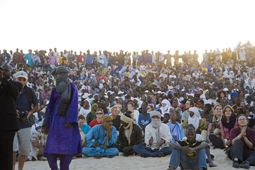 The Festival au Desert was listed this year among many major events celebrating the 50th Anniversary of the Independence of the Republic of Mali. I am sure that everyone who attended – including over 600 foreign visitors – would agree that despite the huge challenges faced by the Festival organisers due to the withdrawal of most of their western financial partners, it was an unqualified success. 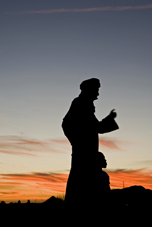 For the many visitors from western countries this was a unique opportunity to experience Touareg music first-hand, and to make connections with people from a culture we would never otherwise get the chance to encounter. The journey from Bamako was not for the faint-hearted, involving some very poor roads and a lot of dust and heat. But after a weekend of astounding music; several stunning desert sunsets; numerous conversations in the sand dunes, and more cups of Touareg tea than I can remember (!) this was without a shadow of a doubt a journey well worth making.

This article was commissioned by Michael Valentine Studio – music photography and reviews:

[1] Tuareg headdress worn by men, consisting of a long piece of coloured cloth wrapped around the head, generally leaving only the eyes showing.