Most of the photographs are available for purchase; the selection on my website is a very small sample of the images available. A wider selection should shortly be appearing on the Official Festival website, but if there is a particular artist that played / gave a press conference at the Festival that you are interested in, please contact me: [email protected] 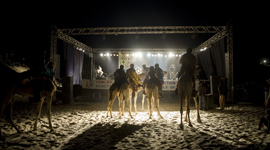